Naomi Duvall is training in puppet design, building and manipulation with Brad Brackenridge at the Nervous System in Peterborough 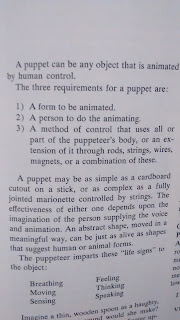 (August 21, 2017)  One of the first assignments Brad gave me was to write a report. He asked that it describe how I see my past, present and future involvement in Puppetry. “Sure,” I said. Piece of cake, right? It was at first, I simply listed all my past puppet exploits, what I'm up to now and a few of the things I would like to do with it someday.

There was another stipulation though, I had to talk about WHY I did it, what my personal connection is to the art form, what it is that makes me passionate about it and how do I see those feelings shaping what I do as they drive me forward. I have to admit that I am slow when it comes to properly expressing myself in writing. I deeply appreciate words and language so I take great care in choosing the right phrase. This makes the task laborious at times until I get a flow of inspiration. My struggle with answering Brad’s question is that I don't pause often enough to consider why I do something. I follow an instinct or a good feeling and act upon it. It is safe to say that reflection and asking myself hard questions is important for me and this assignment has spurred me to gaze backwards and locate my first impulse to animate the inanimate. 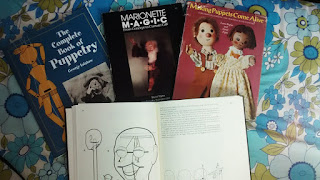 It turned up in a bathtub full of cucumbers, I was 7 and it was my Dad's way of making vegetable washing fun. It was canning season and each cuke had its own name, character and strategy for how to avoid becoming a pickle. It was an utterly mundane task transformed to the magical: characters could fly, breathe underwater, flip, jump, hurl imagined objects. I found it entrancing then and I do now. If I can bring half as much joy and wonder to an audience as those moments gave and give to me I would consider myself a success. That is what drives me, creating and sharing things of value, importance and meaning, truth and nonsensical fun or bitter sadness. I have this need to tell stories and puppetry is one of my favorite ways to do it.

Brad is able to tell stories really well through his craft, it was a huge factor in my choosing him as a mentor. He has provided me with a number of books that he finds useful and I have spent a great deal of this first half of the mentorship poring over them. They have helped me explore some History, different styles of puppet design and construction and I even found some old images of a production of The Pied Piper! The piece I am to help design and build for the Peterborough ArtsWORK Festival in November will be an adaptation of this story. 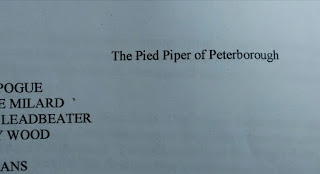 I have been looking at different versions online and if I wasn't already fascinated by the story, my exposure to the first draft that Kate Story is adapting has me hooked! The creative team for the Peterborough ArtsWORK Festival met in July for a reading of the newborn script. Happily, the assembled crew  are also performers and lots of ideas and interpretations flew around the table giving our writer something to work with as she tackles the next draft. One of the vivid ideas mentioned that stuck in my brain is for the Mayor to emerge from a giant Rat suit at one point, I'm excited to see how that idea will evolve. I’m also quite enthused with the choice to set the story locally; I still feel new to Peterborough despite having been born in the hospital there and living here the past few years. I’m curious to see how the setting can affect an audience's connection to the story.

Getting My Hands Dirty 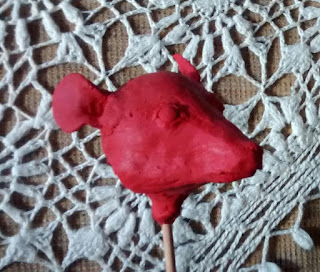 The original training plan had me doing hands-on work much sooner than I actually did. It was ambitious perhaps to think that I could absorb that much information so quickly, I didn't take into account my slower learning style. Luckily the month of August is unformatted so there is plenty of time to play catch up and be on track for September. Brad has given me plenty of space for independent study and made it clear that he is available to answer any questions or concerns I should have. I have been thrown a curveball by my Dad becoming ill in July and needing my assistance. My attention has been divided between learning and taking care of him but despite that challenge I like to think I have managed as well as possible in my mentorship pursuit, all things considered. I feel fully supported and understood by my Mentor. Brad and I share a common trait, a love of laughter. We had a quick but good talk when we encountered each other on the bike path the other day. I appreciate his attitude towards difficult situations, rather than be too solemn he looks at the issue with humorous glint while still being sensitive to its gravity. It helps me to stay positive about the future and makes tough times easier to deal with. I think spending time together during production won't be a chore.

When I eventually did get down to starting some hands on awesomeness I was provided with plasticine and sculpting tools by Master Brackenridge and told to create a face. Drawing from the piece we are working on for inspiration and using household pets as models I decided to do a rat face. 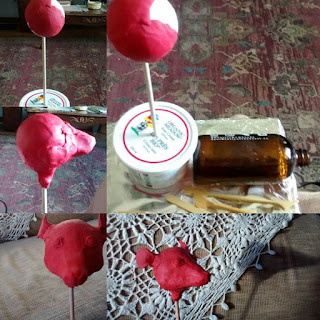 It was slow going  figuring out what tools would do what I wanted them to, and I had to start from scratch a few times but I came up with something I a) liked, b) Didn't want to mush up into a formless ball again, and C) kinda looks like a Rat. Brad indicated that the next step is to do a layer of papier maché, cut it in half, rejoin it and attach it to a body (which I will sew together)

Looking ahead to the final stage of my mentorship, I foresee a busy planning, design and build period in September/October. I am particularly excited about learning how to construct and manipulate a marionette as I find the concept intimidating. The completion and study of the script in the next few weeks will get things moving. This will be a time to keep my eye on how a project comes together. I will observe the elements that make it cook so I can stash the info away for when it's time to originate my own work. I'm coming to understand that something like this doesn't just happen, there is so much that needs to be taken into account. Watching Kate run our meetings, take minutes, keeping in touch with everyone via e-mail, applying to grants, writing the script, scheduling and keeping on top of the team to make sure things are running smoothly has opened my eyes. I will be watching her, Brad and the rest of the team like a Hawk to be able to absorb all I can of this experience.

Posted by Theatre Ontario at 08:06