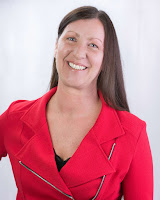 This was my very first Theatre Ontario Summer Intensive experience… and it won’t be my last. My expectations were not only met, but were exceeded. I attended “Who the Heck are YOU?! Creating ‘Character'” with Liza Balkan.

First of all, the woman was amazing. She incorporated movement, exercises, even animal noises, which I hear the classes above us (Directors and Playwrights) greatly appreciated. Thanks for allowing us to play! Liza was full of energy, and delivered a thoughtful approach to learning. She challenged me to re-think the monologue I had prepared ahead of time, and think beyond the intended plan. That particular exercise did more for me than if I had just read aloud the monologue I had been preparing for a month. I was able to incorporate some of what I learned at the course immediately. The many exercises were beneficial for exploring, discovering and identifying what is important to me as an actor. 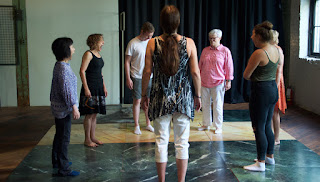 The space at Factory 163 was great! We had a huge space on the bottom floor which consisted of four quadrants. That’s how I looked at the space. The first space was used for warm up, voice and exercises. I had brought my workout gear and yoga mat to keep up at the hotel, but didn’t need it, thanks Liza! The second space was used for sharing monologues and for character development exercises. The third space was for movement, and the fourth space was a round table for some reflection of the day. At times, all four ‘quadrants’ were used simultaneously. I also enjoyed the common areas where I sat with participants from the other courses. We discussed and learned from one another about the various perspectives and viewpoints within the industry.

The plays I attended were not what I would normally select for myself, but I am glad that I had the opportunity to see something different and expand my horizons. I also liked hearing other participants’ impressions. The lunch time guest speaker series was also beneficial because it gave us the opportunity to hear from industry professionals. 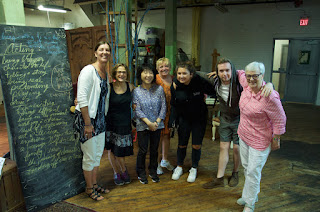 The playwright reading with Kristen Da Silva and her cast members was great! They did an excellent job reading the first act from her play, The Book Club. I wish I could have heard the rest to see how it ends. The dynamic of the actors and how they were seated really lent itself to the atmosphere of the read. I enjoyed speaking with the actors and Kristen after the reading.

My classmates were wonderful people. I won’t name any names, because you know who you are, and how much of a positive impact you had on me. Thanks for your sharing, listening and encouragement. I wish each of you much success going forward and I hope that our paths do cross again someday.

Linda has recently retired LKP Consulting, her training company after twenty-five years. She looks forward to pursuing her first love for acting and the theatre. Her hometown stage is the Kincardine Theatre Guild where she has been a member since 2006, both on and off stage.

Posted by Theatre Ontario at 07:34