Celebrating Excellence in the Class of 2017 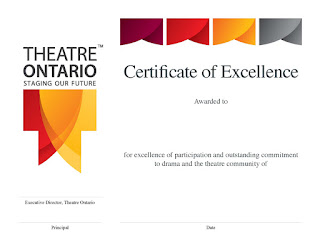 Theatre Ontario's Certificates of Excellence are awarded to individuals who have shown diligence, excellence of participation, and/or outstanding commitment to the drama/theatre community at his/her/their school.

Theatre Ontario is pleased to congratulate some of the “Class of 2017” secondary school students recognized with our Certificate of Excellence (comments are from their teachers.)

Zachary is an outstanding drama student. He acts and directs and writes and he has also been a member of the Improv Team for three years. He has taken drama for four years and is exemplary as a student and performer.

Abdur-Rahman was in my ADA4M course where he was able to direct and act in a show with a large cast. He embraced the challenge and always strives to engage in equity/marginalization in his work. He has consistently supported drama via acting/directing.

Alyssa has been the face of the drama program this year—directed a fall play show and designed scenic elements for the other shows; acted in the Midway Festival and finishing with a starring role in the spring show…as well as President of Drama Club.

The person receiving the certificate may have worked as a performer, technician, organizer of the drama club, or may simply have been of great support and encouragement to others, during or after school hours.  It may be given out at special events such as a Commencement, Recognition Assembly, or Annual Awards Assembly.