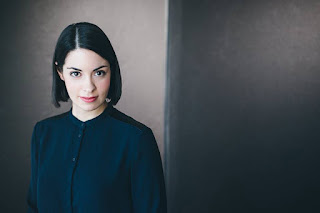 (August 12, 2017) The final weeks of this mentorship ran the gamut of directing techniques and discussions.

I continued to workshop scenes from Bond’s Lear with the actors in Soup Can Theatre’s upcoming production, and Alan encouraged me to focus on how I can take what I discovered from doing the character analysis work, as described in Katie Mitchell’s book, and translate that into a physical life with the actors and play from there. It was a great lesson in the importance of still doing focused, detailed work, and learning how to play from that work and think on your feet. The actors and I made some great discoveries about their characters and relationships which we can’t wait to delve further into once the show is in production.

Following the workshops, Alan and I turned our focus to directing for site-specific theatre. We visited St Luke’s Church at Carlton and Sherbourne, which has been the home of such other site-specific pieces as Litmus Theatre’s Birth of Frankenstein. I’m looking at this space for an adaptation of Edgar Allan Poe’s most well-known poems and stories to be staged promenade-style, titled Tell-Tale at this time. Prior to our walk-through, I identified the three rooms in the church and the six Poe works that I think would be best suited to the piece. Alan brought up that using Viewpoints—composition techniques developed by Anne Bogart and Tina Landau—would be a great lens to view site-specific space and how it would affect story, character, themes, and audience. Keeping Viewpoints in mind during our walk-through, and considering which works would be in which room, I was flooded with staging ideas and specific Viewpoints to focus on with each piece and each room. Using Viewpoints as the main technique to create Tell-Tale will help me ensure that the storytelling is clear and effective, animating both the stories and the space.

We ended the mentorship with discussions about how Lear and Tell-Tale would fit into Toronto’s current theatre climate, and how I could make the move from directing in the independent community to more established companies. For Tell-Tale, Alan recommended that I think about the overall experience people will have in comparison to the experiences offered by other site-specific works. Site-specific theatre is very popular in Toronto, so what can we do to make this production stand out. For Lear, it’s a very intense and longer piece that wouldn’t suit the tastes of all Toronto theatre-goers. Alan recommended considering how audiences can sit through long and extreme works, targeting specific communities through a social context, reaching out to theatre schools as potential places to produce such a work due to the sheer number of characters and complicated subject matter that students wouldn’t be afraid to jump into, and look into multidisciplinary arts festivals, as we intent to combine projection work and fight choreography into this piece.

As for career advancement, Alan recommended applying to different directing internships and training programs, constantly make my own work, build relationships with companies and artists, work on smaller projects to counterbalance the larger works I want to direct, pitch lower-risk projects to established and venued companies, and self-promote. Obviously there’s no quick and easy way to do any sort of career advancement, and I never believed that there would be, but it was very heartening to know that I’m already doing some of the suggestions Alan made. And of course, I need to be solid in the work; that comes first, ahead of pitches and self-promotion and everything.

Looking back on this mentorship process, I feel have a stronger technical foundation that I can build on in a creative capacity, particularly in terms of approaching scripts and creating a fully-realized world of a play. Being specific in the script work must come first and can then be expanded on, creating a much stronger piece overall, and I’ll use that to inform all of my directing work from now on. I now have new ideas for how to expand on my body work. Alan is a wonderful and supportive artist and resource, and someone I can still go to for advice and discussions. I’m very grateful for his time and dedication in helping me become a stronger director, and to Theatre Ontario and the Ontario Arts Council for this opportunity.

The next application deadline for the Professional Theatre Training Program is October 2, 2017.

Posted by Theatre Ontario at 07:33