The Secret Life of Theatre Ontario

Get to Know Me

Ciao! My name is Megan and I am a student at Michael Power St. Joseph Secondary School. For the past four months I have been a Co-op student at Theatre Ontario. If you don’t know what Co-op is, I’ll give you a briefing: Co-op is when a student goes to a workplace environment to potentially see if they want a job in that position, industry or environment. Co-op is a great way to network, venture out into a career position and just gain experience working in a work environment.

I have definitely learned more about what type of position, industry and environment I would like to work in. I would like to work in the playwright side of theatre and eventually move to screenwriting and directing for film and television. I believe that both of those industries allow me to be open and expressive in my writing as well as have full control of what I want the world to see.

My favourite movies include The Fast and The Furious series, the X-Men series, the Transformers series, The Mortal Instruments: City of Bones, 10 Things I Hate About You, A Walk to Remember, The Avengers series—basically any Marvel movie—and almost every action/romance/comedy movie. My favourite television shows include Friends, That '70s Show, Stranger Things, The Good Doctor, Sense8 and the list goes on and on…as you can tell, I watch a lot of Netflix.

I also have a passion for music. I have played the violin for five years and hope to pursue the guitar and piano soon. I wish to pursue music specifically in pop, country and rap song-writing and DJ-ing. I have a great passion for EDM-pop music. My musical influences include singer-songwriters Shawn Mendes, Justin Bieber, Lauv, Logic, Florida Georgia Line, Luke Bryan, Sam Hunt, and The Chainsmokers. 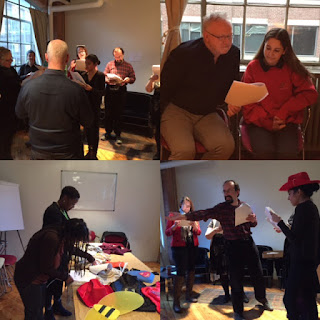 The Holiday Christmas party this December 2017 was a huge hit in Suite 350 on 401 Richmond Street West. Everyone from Suite 350 was invited to participate in Susan Flemming’s A Very Little Christmas Play. Flemming’s play is all about the unexpected and the hilarious when an amateur production takes place in the town of Pritchard’s Corners. The whole event was secretly planned by staff from Playwrights Guild of Canada and the mystery was left up to the tenants of Suite 350, which included Theatre Ontario, the Toronto Alliance for the Performing Arts, and the Associated Designers of Canada.

As everyone gathered in the board room we were told of this mystery play and all the excitement to be unraveled. All acting and stage roles for this play were chosen at random when you walked through the door into the holiday party and let me just tell you, that’s where the fun started.

Actors and stage crew were given their script for the first time so there were bound to be some mistakes, to say the least! A few words were jumbled, props were interesting, and the costumes were very confusing, but overall, everyone was well-adjusted to their scripts, roles and costumes.

The play was unlike anything I had ever seen. Even though staff members of Playwrights Guild of Canada, Theatre Ontario and the Toronto Alliance for the Performing Arts were basically thrown into the play and given everything right up front, it was a memorable—and very interesting—afternoon. Everyone enjoyed themselves very much and I can tell that the members of Playwrights Guild of Canada set the bar very high for the next Christmas party because that would be hard to beat.

We will have to see until the next Holiday Christmas Party!
Posted by Theatre Ontario at 08:07