Theatre Ontario was honoured and grateful to receive a bequest from Dorian Rankin (1926-2011).  As reported at our 2013 Annual Meeting, this incredible gift will enable us to develop our webinar program which will benefit theatre groups and individuals across the province.  Margaret Shearman, a past Theatre Ontario Board member, shared some recollections of Dorian with us.

Dorian Rankin has remembered Theatre Ontario in her will.  One can’t talk about Dorian without including her husband Bill. Although she and Bill were solid Theatre Ontario and community theatre enthusiasts, there are many out there that did not know them very well. 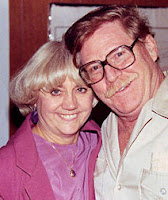 Dorian and Bill were always together at the Eastern Ontario Drama League Festivals, and were members of several community theatre groups in Eastern Ontario.  They never missed a Theatre Ontario Festival, and they also travelled to the Theatre Canada Festival when the Tara Players of Ottawa production of Freedom of the City won the Theatre Ontario Festival Best Production in 1990.  They travelled with the production again when it was invited in 1991 to the Dundalk International Maytime Festival in Ireland.

Dorian’s background in theatre was in vaudeville.  At age thirteen, with her mother’s approval, she left home to join a vaudeville troupe.  She toured the English vaudeville trail as a singer and dancer for several years, playing with the likes of Ian Carmichael, until she met her first husband.

In the mid-1950s, they immigrated to Canada and bred boxer dogs in the Toronto area.  It was there that Dorian joined a community theatre group and met Bill. “Well, he thinks a lot of himself” was Dorian’s first impression.  Bill, an architect by profession, was going through a marriage break-up at the time and Dorian fell for him, another of those theatre romances that luckily worked out very well—they were married for nearly 35 years before Bill’s death in 2002.

Dorian came from Nottingham in England and had the lovely accent that goes with that part of the country.  It was sad that the vascular dementia she struggled with for the last ten years of her life left her voiceless for the last three.

Email ThisBlogThis!Share to TwitterShare to FacebookShare to Pinterest
Labels: Behind The Scenes, bequests, community theatre, Festival