Congratulations to Joe O'Brien, recipient of the 2013 Michael Spence Award for Contribution to Community Theatre 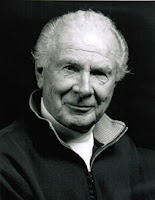 Joe O’Brien's passion for, support of, and commitment to community theatre began in the mid-1950s when, as a youth, he organized a drama club at Cambridge Community Centre where his acting and directing talents led him to win awards at the Eastern Ontario Drama League Festival.  Continuing his theatre studies at the Ottawa Little Theatre, he became a regular member of the famed Saturday Players, performing in and working backstage in Theatre for Children, graduating to the main stage at OLT in the late 1950s.  While learning and developing artistically, Joe conceived the idea and convinced the City of Ottawa to form the Ottawa Community Players as a direct program of the City's neophyte arts programming.

By the 1960s, Joe’s passion for community theatre saw him develop and promote Lakeside Theatre Productions, again under the auspices of the City of Ottawa. The group, growing from the original Community Players and attracting other local community theatre personnel, performed theatre for children throughout the Ottawa/Carleton region and the Ottawa Valley, and performed adult main stage productions for fifteen years.

Recognized for his contributions to the local community theatre scene, Joe was hired by the City of Ottawa as an instructor of theatre arts and creative drama.  As well as teaching children and youth, Joe produced, directed, and adjudicated city-run youth talent festivals, a birthplace for many local artists and performers.  In 1966, Joe was hired by the City to further develop the arts programs within the community.  Following an ever-evolving career in arts administration, Joe retired as Director of Culture for the City of Ottawa where he oversaw the delivery of arts funding and provided advice and resources to local community theatre groups. He returned to Ottawa Little Theatre to act, direct, and work backstage. He represents OLT as a group member of the Ottawa Community Theatre Association and at the Eastern Ontario Drama League, of which he is an active long-time member and supporter, acting for several years as its Northern Section Chair.

“Looking at the list of past recipients, I’m rather shocked and humbled,” said Joe.  “This award is more exciting to me than receiving a Best Director or Best Actor award; this award is about what I’ve been trying to do for fifty years.  I don’t know how to express my gratitude.”