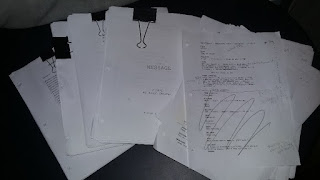 Cut. Add. Move. Scratch that! Add that! Change it. Take out. Throw out! Draft new. Draft again. Page number? New Page! Insert. Read it! Do it. There is a playful relationship with the constant changing of a new script. One that has surprised me, and invigorated me. Working on The Message at Tarragon has given me a new perspective on the art of playwriting. It has brought me consistently to the question of “What does it take to write a play?”—and within that—“What does it take to direct a new play?”

The persistent search for more depth, better rhythm, clearer through-line, specificity in moments among many others is a whirlwind experience, one in which, everyone has to be on their toes. I walked into this mentorship with an expectation to learn the director’s craft. What does it take to be a director? How do you present a play in a specific style? What tools do you need at your disposal? How to listen? What to say? What to not say? Who am I as a director? Halfway through this mentorship has now brought me to the realization that it was an entirely new form of directing that I am to learn.

Watching Richard in this process, the line between director and dramaturg blur into some kind of emerging position. Directurg?! Scratch that! Dramator?! His professional relationship with Jason Sherman is clearly one of experience and is an excellent example of one to strive for—one that contains nurture, trust and honesty. As the dramator peels the layers back of the onion, he facilitates the true vision of Sherman’s work, while pointing out the details that don’t support it.

Richard himself, although his notes and ideas seemed perfectly planned before rehearsal, has morphed and changed within the movement of the changes. A good example of this is in a scene where the intention for the main character was initially to show gratitude. With a few line changes suddenly, the intention became clear that it was quite the opposite. Not only is it just the words being re-arranged and/or cut, entire characters have walked in and out of the play just as easily as a turn of the page. Mz Cunningham turned into Mz Cuttingham when she was thrown on the editing floor until she was revived the very next day and repositioned in the play. Professor Frye, a real-life colleague of Marshall McLuhan, has also seen the editing floor close-up. He has yet to see the light of day again—we’ll see!

Sherman’s process as he works has given me another perspective of theatrical exploration. The rehearsal room has now become the creation room, approaching the work with a clear intent and yet willing to be flexible listening to all participant’s needs and/or suggestions. This can always be a scary place to be when one is creating art. I’ve experienced an instinct to hang onto something because it holds some value, or you presume it does, but does it always serve? It’s solidifying for me how important it is to allow such change and openness to new possibilities. Then there is the problem that when things are cut, something might fall out of sync, something that was put in place by that very thing that was cut—no matter how small. We have also run into this problem. You realize suddenly that there was a small tie that was kept together by that moment. It becomes a juggling game with the script to keep all the elements that tell the story while perfecting moments and sequences for its particular reason.

It is an amazing skill to be able to have such flexibility and discipline. I’m seeing everyone in the room keep a keen eye and ear to the heart of the script. There is a sense of trust with your cast, playwright and with yourself—as a dramator—to be able to play this game. The idea is to know the play in and out, the character’s action, central image and through-line of the piece and to never steer off its course. It’s your base. Scratch that! Your foundation. Scratch that! Your anchor in the currents of the changing words. Which brings me back to all the questions I went in there with in the first place. Whatever you do, say, present, tools you use, through-line is key. Everything else is secondary. I have realized for the first time how the role of dramaturg and director are so very closely linked.

I am enjoying this experience participating in this “dramatorical” position. I have always been drawn to modern plays and new creations and the experimental approaches to fresh ideas and concepts. I always find something satisfying in the new grounds that can be explored and the extensive journey it takes to get there. Is a new play ever done at opening night? A thought that could be debated. Whether presenting something published or new I love its relation to the world we are in, the connections that the cast and production team make to their own lives and the contributions that our skills and souls can make to its ideas and words. It becomes more than literary, it becomes auditory. It becomes sensual. Happening simultaneously (to quote McLuhan) “We use all our senses and entire makeup in its experience.” Is it not why we do art in general?

With the mounds of drafts and cuts, morphed, scratched page inserts accumulating on my desk, I come back to the question once again of “What it takes to create and present a play?” – Vision! Openness! Acceptance! Truth! Trust! Play! A Team!

Can’t wait for the second half in which we take this new creation into tech, previews and performance and see the vision of this expressionistic style come to life with all the elements.


The next application deadline for the Professional Theatre Training Program is March 1, 2019.

Posted by Theatre Ontario at 07:57