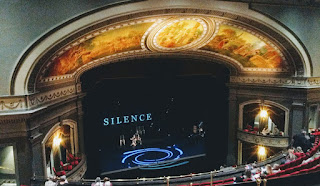 (January 27, 2018) The beauty of a new work is you set a precedent of what the show is. No one has done it before. The liberties and responsibility that are born from this are insurmountable. The hope is also that many remounts and realizations will proceed from it. I am blown away in the time that we had, that we were able to put together this show. With so many takeaways to choose from these are the biggest stand out lessons I learnt during this process...

I cannot understand how a show about women, written by a women can be dubbed a "Chick Flick"? This was overhead by one of the members of the company during a preview for which I said, "Let us remember that one of the most popular films of all time is...The Notebook." Any comment like that denigrates a woman's experience to being unimportant when in fact women's stories are stage-worthy material that need to be heard more and more. I'm done with "Dick Flicks" to last a lifetime.

The show is far more than a cliché and what makes this show work extremely well is that the characters are not without their flaws, and executed by the actors who were exceptionally suited to the characters they were cast to play. I will miss Graham (Cuthbertson), Tara (Rosling), Michael (Spencer-Davis), Suzanne (Bennett), Madelyn (Narod) and Cat (Catherine Joell Mackinnon.)

Trina Davies has written a beautiful show. It is dark and reflective and poetically optimistic and triumphant. This sense of elated escapism and the theme of love in the show is very needed right now. In our current socio-political climate as well as in the theatre community, this show proves that stories about women are crucial and critical in order that we may move forward conscientiously and be welcoming in our spaces in future.

In my original application I had stressed the importance of wanting to learn how to build a show in a collaborative nature rather than in isolation to a team. This was keenly observed in this show. The creative team on this show worked together extremely well. My next project I do is going to shadow another mentor and idol of mine Marie Clements on her upcoming feature film to be shot in Yellowknife, Kamloops and Morocco. Building upon this principal of team work is critical as I step out of my comfort zone and build connections within my film circle.

The next application deadline for the Professional Theatre Training Program is October  1, 2018.

Posted by Theatre Ontario at 07:58