Ed Procunier was such an integral part in the life of the arts it is difficult to find a slot into which his incredible contribution could possibly fit: artist, teacher, adjudicator, director, mentor, advocate, force—a caring and erudite man of the arts at all times. 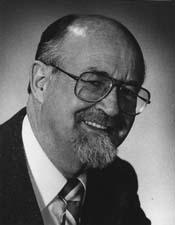 When Ed was the President of Theatre Ontario and I was the Board Chair, we both lived in London, Ontario and so became known as “the men from London.”  Those were great years with great conversations on the trips back and forth, and Ed taught me a lot!  Those trips frequently included stops at galleries or home studios where paintings were exchanged/bought/sold; my visual arts education was gained first-hand.  The trips finished at Ed’s home, finding a place for the new acquisition in a home already floor-to-ceiling in every room with brilliant Canadian art—an incredible experience!

My introduction to Ed’s writing was appearing in a play, Two Sides of Darkness at the London Little Theatre, a play in which I began to appreciate Ed’s linguistic appeal, his use of the English language, his understanding of history, and his very real concern about the stage and the acuteness of character development with language need.  He had me hooked.

When Ed became one of the founders of London Community Players, I was fortunate to be able to direct world premieres of several of his plays—an unforgettable experience!  The opportunity to work directly with a demanding playwright, the importance of language and punctuation, the understanding of character and the development of trust between playwright and director was mentorship in its highest form.  Ed’s dramatic stories had a reality, always based on true experiences and friends he knew (and always protecting the source.)

Ed Procunier had many accomplishments in his lifetime and we are all the richer for the time he spent with us, and the catalogue of fascinating plays he has given us to continue to explore.

Ed—we salute your memory and your many contributions to the arts in Canada.

Edwin Robert Procunier died at Victoria Hospital, London on Monday, September 26, 2011, just five days before his 84th birthday.  A Memorial Celebration will be held Saturday, November 19, 2:00pm, at The Palace Theatre, 710 Dundas Street E, London, where “Procunier Hall“ will be dedicated in Ed's honour. In lieu of flowers, charitable donations may be made to London Community Players, 710 Dundas Street E, London ON N5W 2Z4, to purchase seats, lighting and sound equipment through the Procunier Hall Enhancement Fund.
Posted by Theatre Ontario at 10:16