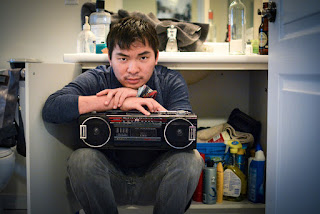 Super grateful to be chosen by Theatre Ontario to embark on this crazy dramaturgy adventure.

First, a bit about me.

My name's Aaron. I'm 25 years old and from Hamilton, Ontario. There's a joke I tried to write here, but none of them made my roommates laugh.

I am relatively new to the world of dramaturgy, as my training in theatre school and beyond has been primarily in playwriting and direction.

I kind of got involved in it by accident to be honest. In 2015 I was an inaugural member of Factory Theatre's Foremen Directing Training Program. The year ended with us leading a workshop of a new play and presenting an excerpt from it at Factory's Sparks Fly event. This entire process kind of terrified me because I had never done this before. My playwright was based in Montreal, so I would have to do the dramaturgy over the phone. Much to my surprise, this entire experience went very well.

Over the past two years since the Foremen, I've been invited to assist in a handful of dramaturgical projects. As I am a playwright myself, I feel like I kind of have a sympathy for them—the playwrights I mean. When I write myself, I'm incredibly anxious, self-depreciating and neurotic, so when I'm on the other side of the table, I try to keep my dramaturgy to the point, blunt and helpful. My ethos when I dramaturg is that I try to get my playwright excited and inspired to write. If I don't do that, I've failed, simple as that.

My investment in dramaturgy is because I am from a town where there isn't much. Yes, there's a regional theatre in Hamilton, but because of their subscription base and the size of their house they are unable to produce original work on their mainstage for fear that it won't sell. This has a bit of a ripple effect in the community, especially among young folks of colour, who are not in the demographic of the regional theatre's audience. Visible minorities don't attend theatre in Hamilton for whatever reason. The young artists of colour see this and they leave the city. It's not on the regional theatre to fix this, as they need to cater to their biggest demographic. They need to sell tickets to maintain their building and they have a trusted and true method.

I didn't think theatre was a viable career until I came to Toronto and saw people who looked like me on stages, behind stages, directing, designing and being the leads in plays. Part of the reason I think Toronto is so different from Hamilton in terms of having non-Caucasians making work is because there are more developmental opportunities in this city. Playwrights of colour who may not have the same training as their Caucasian counterparts can find mentors and access to professional new play development because the people running the programs understand the necessity of their voices. Their worth is reflected by professional interest and when their work premieres it is ready beyond a first, second or third draft. It can be taken seriously, not dismissed as a “good try” or an amateur taking a stab at a script.

My dream is to do this in Hamilton. When I'm ready and have sufficient training I want to return home and run a theatre company that specializes in developing and presenting new work by playwrights of colour. I want to make sure that brown artists—especially emerging ones—feel like someone in the city has their back. If Hamilton is to become this theatre mecca that the newspapers are talking about, it needs to have work that reflects the diversity of its population—most importantly work that is good and ready to be seen by an audience. Perhaps then, artists of colour will have a reason to stay and feel that they can do this.

So why do the PTTP then?

I remember sitting at coffee with one of my most trusted mentors. We were in the midst of applying for a grant, and somewhere in our conversation she asked me where I saw myself in 10 years. On a whim, I told her that I was interested in dramaturgy, as noted in bold font at the top of my resume. Perhaps naively, I stated proudly that I had dramaturged three plays in the last year and found all three to be very positive experiences. I explained my Hamilton plan. Thus, I was now a dramaturg for hire and this was to be my career path. Forever and always.

When I had made this statement, she took a moment and looked at me super seriously (whenever my mentor does this, I usually know I've said something stupid, arrogant or very, very wrong.) She said that I had no training in dramaturgy and was literally flying by the seat of my pants. Further, she stated that people trained and practiced all of their lives to give themselves that title and just because I had taken one class in it and had dramaturged a few plays didn't make me a practicing dramaturg. Like any career I needed training in it before I inevitably let down a playwright.

I took this to heart, because it was true. If I am to continue my dramaturgical practice, I need some kind of formal training, some kind of fundamental crash course in how to structure my process. While I've been incredibly lucky with the playwrights I've worked  with, there's always been an inherent fear that I'll fail someone or I'll confuse them or even worse, I'll put them off writing because I don't know what I'm doing. Especially as an artist of colour, where we need to nurture new voices in our community that may not have the same training experience as others, this is the worst possible thing that I could do.

I was in line at a BBQ this summer, eating some fried animal when Marjorie came up to me and asked me what I was interested in. I mentioned dramaturgy. This PTTP offer happened right then and there as we consumed fried things.

What really impresses me about Marjorie (and really most theatre folks I admire) is generosity. Everything about her bleeds generosity. You walk into the Cahoots office and you feel like you're at home. You sit in on the Hot House playwrights meetings and it feels like a group of old friends consuming cheese and licorice. Then you hear the work that they share and it's bold and daring (one of the plays in development is a bloody noir about drag kings and queens assassinating businessmen!).

On one of the first Hot House meetings I attended, Marjorie talked about how she doesn't create safe spaces, but spaces where people can be brave and take risks. It's what I admire the most about her, how she can work with new and experienced playwrights alike and inspire them to take that extra step or write that scene that they're afraid of through her curation of space in Cahoots' brand, her own practice and her company's outreach.

I will be with Cahoots from now until October 2018.

Marjorie and I have come up with 3 distinct learning objectives for my time at Cahoots.

Firstly, because of the Hamilton project, I want to learn how a dramaturg functions in a deep development process and how their role evolves as the project enters production. I will be assisting Marjorie on dramaturging Jani Lauzon's I Call Myself Princess from its workshop in January 2018 to its production in September. I want to be able to see what Marjorie's process is like and what objectives she has as a dramaturg in each stage of development so I can create keystones for my own process.

Throughout the year I will also be assisting on a variety of projects where the dramaturg is in different positions beyond new work development, including production dramaturgy, leading and running workshops and post-mortems and how to structure outreach to build new audiences.  I will be traveling to Scarborough for Cahoots' Lift Off! Presentation tomorrow to see this in action as the first part of my training.

Secondly, I want to learn about the dramaturg as a curator, specifically in how Marjorie programs Cahoots' season and selects RGTC (Ontario Arts Council Recommender Grants for Theatre Creators) applicants for funding. In addition to this, I want to learn how Marjorie curates space for artists and audiences alike so I can take that into my own process. On the 28th of November, I will be attending a conference for pluralism in theatre as part of my education in this area. I want the playwrights and creators I collaborate with to feel safe in the rooms I run or lead, so they can take the biggest risks possible.

I'm really stoked to get started (literally tomorrow)! Excited to dive in!

Posted by Theatre Ontario at 08:16