At last year’s Festival, we celebrated playwriting that premiered at Ontario’s community theatres.  One year later, Peterborough Theatre Guild takes the stage at Festival with a world premiere production.

Peterborough Theatre Guild began in 1965, purchasing and renovating an old church that had been gutted by a fire.  They have hosted our Theatre Ontario Festival three times—in 1980, 1993 and most recently in 2001.  Peterborough Theatre Guild has represented the Eastern Ontario Drama League (EODL) many times at Festival—most recently in Kanata in 2009 with Twelfth Night—and winning the Elsie Award for Outstanding Production twice: at the 2006 Festival in Sarnia for Someone Who’ll Watch Over Me, and again at the 2008 Festival in North Bay for Proof. 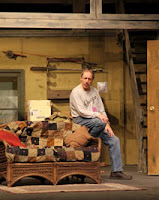 This year, they’re presenting The Mouse House—an original work written and directed by Robert Ainsworth.  The play is a suspenseful drama set in a secluded cottage where an author, struggling with writer’s block and his own demons, tries to retreat from the outside world to finish his book—until he receives an intrusion.