Gore Bay Theatre is a community group located on Manitoulin Island in a small town of 850.  They are busiest during the summer season, catering to a tourist audience and presenting two to three plays in repertory.  Over the past six years, Gore Bay has produced 19 plays including five children’s plays and two major musicals—the Fall production of The Sound Of Music played to over 700 people, or approximately 80% of the population of Gore Bay.  This is their third appearance at Festival as the QUONTA representative—in 2007, they presented Norm Foster’s Kiss The Moon, Kiss The Sun at the Festival in Newmarket, and two years later they traveled to Kanata to present John Mighton’s Half Life. 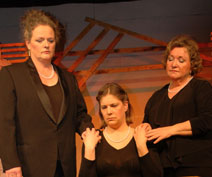 That trend of presenting Canadian-written plays at Festival continues this year with The Attic, The Pearls & Three Fine Girls, created collectively by Jennifer Brewin, Leah Cherniak, Ann-Marie MacDonald, Alisa Palmer and Martha Ross.  This show “captures the essence of family and sisterhood in an infinitely humourous and poignant script,” said Walter Maskel, Director of the production.  Their father’s death forces the Fine sisters to confront their childhood and re-define their future together, just as it forces all of us to acknowledge the fragility of family.  At QUONTA Festival 2012 in Elliot Lake, in addition to Best Production, the show was awarded Best Director (Walter Maskel) and Best Visual Presentation (Walter Maskel, Tim Lafonde, Bill Viertelhausen & Dave Edwards.)

Walter will also be one of the four recipients of the Michael Spence Award for Contribution to Community Theatre at Sunday’s award brunch.
Posted by Theatre Ontario at 15:34