Well, now that I have your attention, read on. 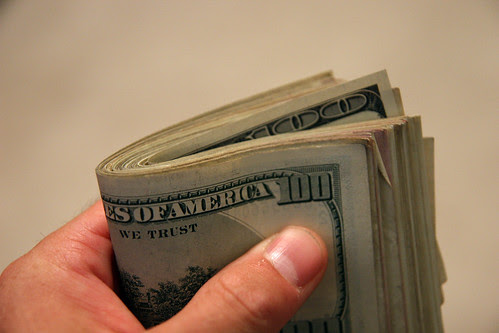 As an independent theatre producer, I constantly find myself paying for my projects out of pocket. Yes, I have received grant money in the past and I do believe they still offer much needed help to artists. However the process to get them can be lengthy, the competition just keeps getting tougher, the pool money available often seems to be shrinking, and at the end of the day, after jumping through all the necessary hoops, you're still not guaranteed a dime. (That said, for more information and tips on grant writing, please see some of my previous posts here and here, as well as my podcast series with the Ontario Arts Council.) What's a poor artist/producer to do? Well, if you've been anywhere near the Internet in the last year or so, chances are good that you've heard about Crowdfunding. According to the knower of all knowledge (i.e. Wikipedia):


Crowd funding or crowdfunding describes the collective effort of individuals who network and pool their money, usually via the Internet, to support efforts initiated by other people or organizations. Crowd funding is used in support of a wide variety of activities, including disaster relief, citizen journalism, support of artists by fans, political campaigns, start-up company funding, movie or free software development, inventions development and scientific research.

Now, you might not have been aware of the term "crowdfunding," but you've probably heard of the multiple platforms out there that perform this very service. I'm talking about the Kickstarters, the Indiegogos and the GoFundMes, among others. So, you just pick a crowdfunding site, put in your brilliant project, send out a tweet and BLAMMO! Now you can just kick back and watch all that glorious moulah roll in, right? Well, not quite. While I personally find crowdfunding to be easier than writing one grant application after another, it still involves quite a bit of work. From choosing the platform that's right for you, having a financial goal in mind, creating perks, leveraging your network and fans, making campaign updates that don't annoy the heck out of everyone you know and following through on your promises, developing a successful crowdfunding campaign requires a lot of careful planning and considerations.

ED. UPDATE: Our next "Crowdfunding Essentials" workshop with Nancy will be on November 15, as part of our "Artist as Entrepreneur" Boot Camp.

Nancy Kenny is a professional actor, writer and independent producer. She is a founding member of Evolution Theatre in Ottawa, now entering its seventh season, and has toured her one-woman show, Roller Derby Saved My Soul, to great critical and public acclaim across the country. She ran a successful crowdfunding campaign for RDSMS and is excited to share with you what she learned along the way.

For almost ten years, Nancy has been working in marketing, promotions, and event planning with a focus on social media and theatre arts organizations.  She has worked professionally for the University of Ottawa, the Canadian Museum of Civilization, the Canadian War Museum, the Great Canadian Theatre Company, and Evolution Theatre.  She was the Interim Online Communications Coordinator for the Ontario Arts Council, and currently produces and hosts their monthly podcast series.  She is also the Social Media & Community Manager for VIA Rail.