Theatre Ontario is now inviting nominations for the 2012 Maggie Bassett Award.  The award is presented annually by Theatre Ontario to an individual who, over a number of years, has made a sustained and significant contribution to the development of theatre in Ontario. 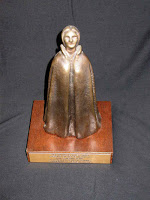 Full award criteria, history, and nomination guidelines can be found on our website.  For more information, please contact Brandon Moore, Communications Coordinator at Theatre Ontario, at brandon@theatreontario.org or 416.408.4556 x.15.
Posted by Theatre Ontario at 09:10