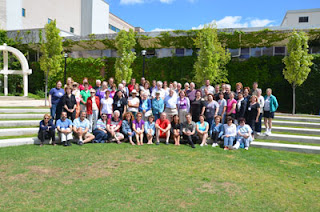 The 2011 Summer Theatre Intensive took place at Wilfrid Laurier University in Waterloo this past August.  Nearly 60 people from all over Ontario—and as far away as Halifax, Michigan, Illinois, and Bermuda—enjoyed themselves in one of four different courses taught by top-notch professionals. 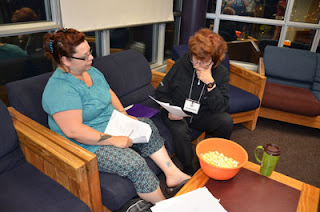 I was able to sit in on a few classes and get a glimpse of the work being done.  In the “When I’m On Stage…Who Am I?” course, I watched as partners “slashed” and “flicked” at each other while incorporating Laban techniques to broaden their character work.  I saw new directors in the “Now What Do I Do?” course learn how to block actors.  I listened in to Christopher Newton during his Directors Symposium day while he was sharing his thoughts on the whole experience of going to the theatre—why not have beautiful gardens outside the theatre so that the audience is in a more pleasant frame of mind when entering?

One particularly memorable moment for me during the week was the afternoon I spent in a park with the Shakespeare Conservatory class.  Instructor Andrew Tidmarsh had chosen an outside setting for an exercise.  The scene was a meeting between courtiers and farm folk.  The courtiers had to leave their home due to lack of food when venturing outside of their community into a new world—a world where it was okay for strangers to come up to you and touch your garments and hair and invade your personal space.  I was asked to video whatever caught my interest.   While the conversations were not in Shakespearean verse, what I found amazing was that none of the actors ever broke character; not even when some very funny exchanges took place.  They were completely committed. 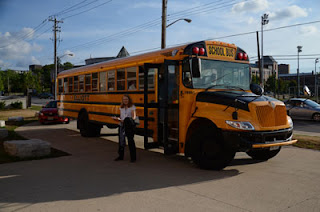 While the days were all about learning, the evenings were all about relaxing.  The week included a bus trip to the Stratford Shakespeare Festival where we saw Twelfth Night.  Thanks to Murray Tilson and Rick Kerr who brought their guitars along and played for us on several occasions.  I also thank Chandra Mulder for her enthusiasm in planning our closing party, and everyone who shared their “party pieces” that evening.

Photos courtesy of Ros Schwartz – thank you Ros!
Posted by Theatre Ontario at 13:54